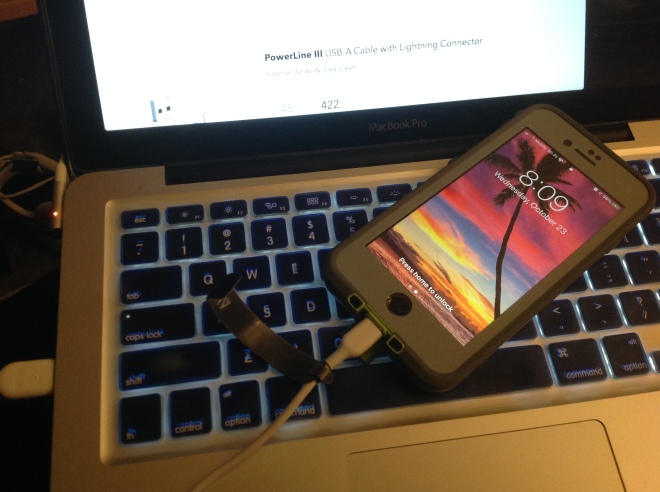 Posted on October 23, 2019 by wesleywestfall

I love Anker; I may have said so previously. But when folks ask, I take the opportunity to preach it. I also preach when folks don’t ask, but…

The good folks at Anker saw fit to bless me with another bit of kit, and while I’m contractually obligated to post this review, I’d do it anyway; Anker is the real deal.

I’d have more pictures but, alas, my use of this Anker Powerline III Lightning cable has been chronically ubiquitous. For starters, the Velcro tie isn’t new to me. It’s something I did on my own with Apple’s OEM cables — all the way back to the extension power cable on my Graphite iBook and dock cable on my 1st Gen iPod touch — to keep them neatly in bags and pockets and car consoles, but then I had to find these ties on my own. I’d trade back every Apple decal they’ve included with their tech just for the hook-and-loop tech of Velcro to keep their cables tidy. So, yet another reason to #UseAnkerInstead over OEM: you’re good to go out of the box.

And when I say go, I mean gone. I shook this Powerline out of the box as soon as it arrived and hopped in my car because I knew I’d need a cable there. Having a neat bundle of cable that fits in the pocket in maybe the same space as your keys means it’s never a chore to lug it with you. And having the ability to charge (or connect) your phone with one pull on the tie is an experience you might only appreciate once you’re combing out a tangle of spaghetti wires to find its business ends. Equally important, I think, might be the cable’s “memory.” Most other cables will keep their kinks, which I think can aid tangling. However, I’ve noticed that Anker cables have “softer” kinks once unfurled. You can still see the bends, which helps to roll them back up, but they’re not nearly so sharp.

So far, while easier to deploy, the Powerline III is also quite durable, even in the hands of friends and colleagues. As they tend to know I travel with Anker gear, they’ll know where there’s a cable to borrow. When I produced this white, nondescript cable, they wondered where either of my two red, Powerline+ II cables went. A: Nowhere, but they’re part of my dedicated bag for Ol’ Reliable, my Astro E4 portable charger. Once in hand, despite the color, they’re disabused of the notion that this cable is OEM: it’s thicker, more resilient, and the plugs are sturdier. Whether it’s deliberate or absentminded, I know my niece is wont to slinging her cables around like a lasso. While she doesn’t do it in my presence, a dozen sessions of loaning her this III saw no apparent ill effects other than the Velcro picking up some fuzz. In all, survivability seemed high regardless of her efforts.

The MI-certified compatibility also appears to be in working order. Between plugging into the Apple brick, MacBook, Anker portable and car chargers, and using a combination of OEM, +II, and III, charging seems uniformly rapid, and connecting to devices is reliable. I’ve experienced some third-party cables that could charge but not connect to computers or cars. While I didn’t have a car available to test connectivity with the III, it worked just fine to my MacBook. 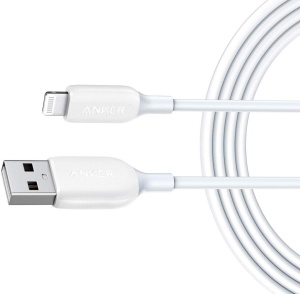 I’ve told my niece (and anyone else within earshot) that they might be saving a couple bucks by buying a USB cable they find at checkout, but buying an Anker cable will save them in the long run. Between not having to re-buy a cable and having a stout cable that won’t let you down if you really need it, it just makes sense to #UseAnkerInstead.